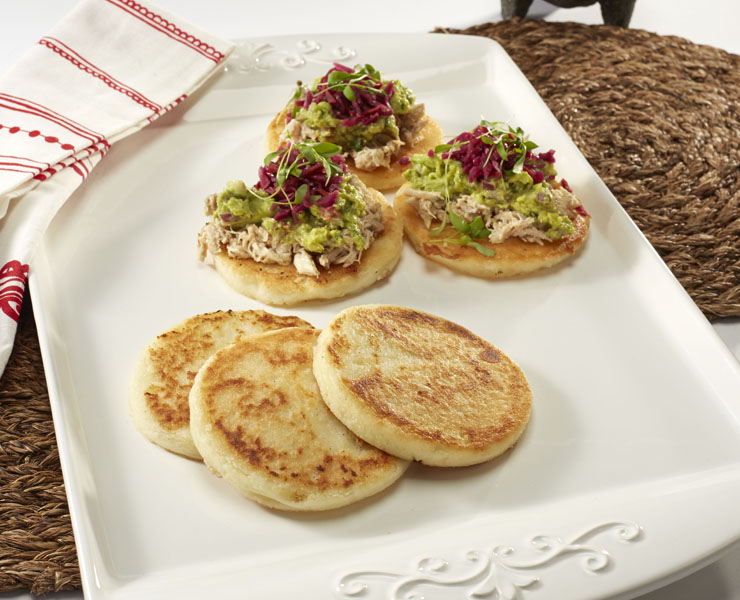 A culinary canvas, designed to stack or stuff with an ever growing arsenal of accompaniments. Influenced by the classic Latin American cuisine, Kabobs’ Large Arepa provides a creamy, moist center versatile base to build-upon. Consisting of Arepa flour, and Mozzarella , the arepa can be baked or griddled, creating a crisp exterior, with a dense, moist center.

From frozen place on low Pre-Heated flat top with a little oil and cook for 3-4 min on both sides (traditional method). From frozen bake in a Pre-Heated 350 °F Convection Oven for 10-12 minutes or until done.

A velvety blend of sweet corn, rich heavy cream, and fresh eggs. Perfect as a side, breakfast, or dessert.

Miniature beef frankfurters wrapped in a blanket of puff pastry.

A blend of chicken breast, onions, potatoes, and peas, mixed with a fragrant medley of herbs and spices, wrapped in a chick-pea flour triangle pastry.

Onions, potatoes, and peas, mixed with a fragrant medley of herbs and spices, wrapped in a chick-pea blended flour triangle pastry.

© Copyright 1980-2012 Kabobs Inc - 5423 North Lake Dr., Lake City, GA 30260
Products | About | Wholesale | Blog | Multimedia | Contact | Shipping and Return Policy | FAQ | Testimonials | Search
The images on this site are the property of Kabobs and the use of these photos is prohibited without the expressed written consent of Kabobs. They are to be used exclusively in conjunction with Kabobs products and Kabobs approved distributors.